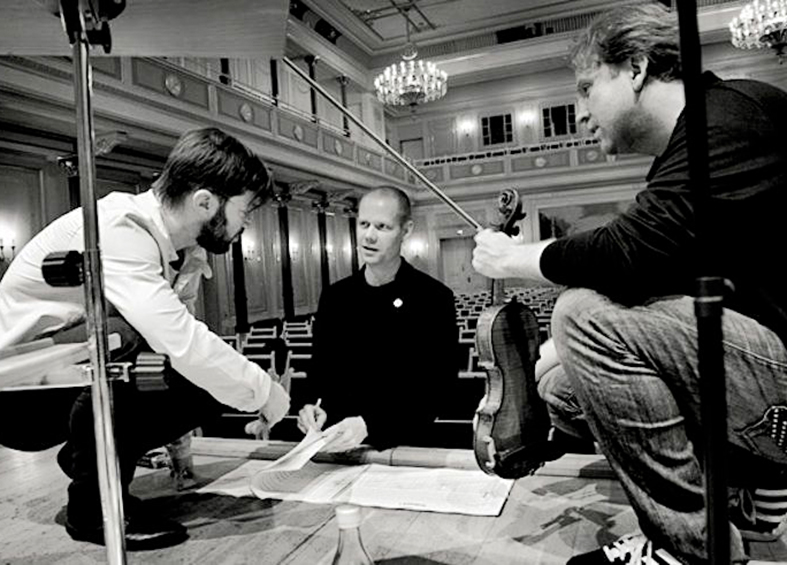 And the winner is… Max Richter!

On October 10th, 2013, “Recomposed Vivaldi” will receive the Echo Klassik award in Berlin. Max Richter created a masterpiece with his Four Seasons arrangement. This is baroque music today – the melodies are altered, Minimal Music elements are added, the sound updated. Yes, this is Vivaldi, but Vivaldi reimagined. The recordings were made by Daniel Hope, conductor André de Ridder and the Berliner Konzerthausorchester.

Five albums have been released in the Recomposed series so far. Starting in  2005, the idea was simple. Invite an artist to arrange, remix, ‘recompose’ treasures from the famed Deutsche Grammophon archive.

The idea itself wasn’t new. Remixes are a long-running mainstay in jazz, pop, dance and rock. Emerging in the early 1980s, dance-floor hits were churned out in “Maxi” versions.  Different clubs hosted different styles. There were new beats, added vocals, additional instruments, the music was slowed down, speeded up – the routes were many but they all ended up on dance floor. Whether house, techno, pop, rock, latin, the sounds and grooves varied according to who came and what they wanted to move to. You could even hear the same track in different arrangements. As demand intensified, even formatted radio stations wanted their own mixes.

Mix quality varied as widely as the mixers asked to create them. Some were conservative, some radical. And sometimes the original material was hardly recognizable. There were titles where only one sound or one riff remained of the original. The remixer was co-creator, some took over entirely. It could be fun and illuminating, or it could be destructive and excruciating. The very popularity of an artist could be influenced by a mix, a cool one lending credibility to an uncool artist. And an unknown producer could quickly make a name for himself. And earn a lot of money. Good mixes cost good money.

Years ago even classical repertoire was adopted by pop bands, but back then they didn’t mix, they lifted and performed passages. In the 70s, bands like Emerson, Lake & Palmer; Ekseption; James Last and His Orchestra or musicians like Jacques Loussier and Deodato had mega hits with classical works. For some of us, that was our introduction to the classical repertoire. It was ELP’s Pictures At An Exhibition that seduced me into listening to the original work for the first time.

But remixes of classical recordings themselves? That was still heresy. Then Universal France boldly released an album on which Pierre Henry’s work was edited by various DJs: Fat Boy Slim and DJ Koze, among others. My colleague Martin Hossbach produced the album Replay Debussy together with Christian von Borries. Eight artists were invited to participate, Ryuichi Sakamoto and Jamie Lidell among them. Each worked individually on the same Debussy recording of Prélude à l’après-midi d’un faun. The world was ready at last. The work was rewarded the “Preis der deutschen Schallplattenkritik (German Record Critics’ Award). A seal of approval for non-sellers, you might say.

Recomposed was a new concept. Individual artists would be given a key to the open vault, the treasure chest of 100 years of DG production. It was there’s to look into, rethink, recompose. There would be only artist per album and they were free to create – re-create – as they saw fit. Deep knowledge of the catalogue was not a requirement. Openness, imagination, creativity and curiosity were the only criteria. We chose those we knew would be the most inspired by the prospect.

As always, there is the idea and there are the obstacles. Not all titles were freely available. Arrangements of works by living composers or those who’d lived within the last 70 years required approval by the living composer or surviving estate and publisher. Often, as in compilations or special arrangements – the consent of the original interpreters had to be obtained, depending on the contracts. Sometimes no permission was necessary. Other times, negotiation could take months. Reasonably enough, the more successful the artist, the more work it took to come to terms. We needed to convince them that we were respectful of their artistry.

We aimed to launch the series wit Jimi Tenor. Tenor had made a name as a multifaceted musician. From his electronic titles to his jazzy Afrobeat excursions he was open, versatile, delightfully unpredictable. He jumped at the chance, choosing contemporary works from such composers as Arvo Pärt, Steve Reich, Olivier Messiaen, Esa-Pekka Salonen, Igor Strawinski, Pierre Boulez and Edgar Varese.

Tenor deconstructed and reconstructed. He mixed, edited and added new grooves and instrumentation. Every day he sent us the latest versions of his arrangements. The highlight was Stravinski’s Le Sacre du Printemps. This is when we first began to learn of the complexity of the undertaking. Stravinsky had died in 1972. We needed permission from the estate administrators and publisher. The publishing house Boosey & Hawkes warned us that the Sacre was sacred. There is where we jumped in to show them the care we were taking. The Boosey & Hawkes repertoire managers in Berlin liked what they heard. First hurdle jumped. The next: An old confidant of Stravinsky would have the last word. We sent recordings and attached a detailed musicological analysis, hoping this could help. A year passed. Then came the reply: denied. We would have to wait until 2041 when it will be 70 years since Stravinsky’s death.

Then came other obstacles. Both Arvo Pärt and the widow of Olivier Messiaen refused authorization. Tenor had delivered all this work that he took such pains to get right. No go. He was desperate. I was, too.

Meanwhile we had started another edition with the German producer Matthias Arfmann. Arfmann played with the Kastrierten Philosophen in the 80s and later founded the Turtle Bay Country Club. He also produced the German-Hip Hop-legend Jan Delay. Independently from us he had had the same idea. With Peter Imig, Henrik Haubold and the singer Onejiru he worked with variations on well-known classical motifs: Gustav Holst’s The Planets, Dvorák’s New World Symphony, Richard Wagner’s Dutch Overture and more. Pop, dub and Afro were just some of the key ingredients. The original material came from Herbert von Karajan and the Berliner Philharmoniker. Here we were in luck. The necessary approvals from the Karajan family and the “Phillies” were given willingly.

The marketer in me determined that best would be to release both albums simultaneously. The comparison was intended to arouse curiosity. With Tenor’s permissions still withheld, however, that wasn’t to be. We proceeded the Arfmann release alone. Silence. As expected, the newspapers ignored us. The public reaction was disappointing too. The single was too complex for radio DJs, too relaxed for club DJs, too melodic for lounge DJs and too lounge-like for classical fans.

Then luck came to us, along with permissions granted. We finally released Jimi Tenor the next year. The album was radical, the critics were thrilled, the sales were modest. But the Deutsche Grammophon connection brought unexpected benefits. At a Yellow Lounge party during Popkomm 2006 sections of Jimi’s work were performed. And not just by anyone. It was the orchestra of the Deutsche Oper Berlin conducted by Jimi Tenor himself.

Now we were hooked. The third recomposed album was produced by Moritz von Oswald and Carl Craig. Von Oswald is a classically-trained percussionist who first performed with the youth orchestra of the Schleswig-Holstein Festival under the direction of Sergio Celibidache and Leonard Bernstein. During rehearsals, Lennie kept an eye on the handsome Moritz, who didn’t return the attention.

Moritz is one of the few classical musicians to have pop in his blood. At the beginning of the 80s we played together in the Doraus & Marinas and Palais Schaumburg in Hamburg. Moritz grooved like nobody’s business. Except maybe for Steve Gadd.

In the mid 80s Moritz left Hamburg and moved with his family to Berlin. From here he started an unprecedented career as a techno and electronic artist.

Recomposed was his first chance to combine his two musical lives. Carl and Moritz picked two famed prizes from classical literature, Pictures At An Exhibition by Mussorgsky and Bolero by Maurice Ravel. As courageous as the choices were, the arrangements were bolder still, Bolero even being performed without percussion. New facets of the works shined. They created a refreshingly new composition with over 60 minutes of duration.

Once again, the original recordings were made by Herbert von Karajan and the Berlin Philharmonic. Karajan went pop. SPEX magazine published an interview whereby Oswald spoke at length about Karajan’s significance in music history.

Yet once again we had copyright problems. Copyright restrictions can vary from country to country. Germany had shorter ones, elsewhere did not, which is why the album couldn’t be released worldwide. Nevertheless, at home in Germany it became the most successful album of the series so far.

Volume 4 came from Matthew Herbert, one of the most extraordinary artists of our time. Herbert stands for quality, humor, attitude and taste. We’d approached him a few years earlier but he’d turned us down. He had too many projects going at once, not the first time that had happened to him.

Now he was ready. He picked Mahler’s 10th Symphony, the unfinished one, in a recording by Giuseppe Sinopoli with the Philharmonia Orchestra. Herbert made only small, subtle changes – remaining faithful to the basic character of the work. Mahler connoisseurs were impressed. He was even invited to perform his interpretation at the famed Mahler Festival in South Tyrol.

Recomposed established itself as an innovative project. The care we’d taken and the respect we had for the originals came through. The New York Times reviewed us. And in my local record store around the corner, a Deutsche Grammophon vinyl smiled at me. That was the way it was meant to be, even if the sales weren’t quite what we’d hoped.

That would change with the next release. Artists had begun approaching us. The composer Max Richter and his manager Matthias Schneider knocked at our door. “Max would like to rework Vivaldi’s Four Seasons.”

He chose the Archiv (a Deutsche Grammophon sub-label) recording of The English Concert. But a short time later he changed his plans. No longer did he want to remix. He wanted to rewrite and re-record. This would be ‘recomposed’ in the truest sense of the word.

Now we were looking for orchestra, conductor, a soloist. I told Daniel Hope about the idea. He wanted in. So did conductor André de Ridder. The director of the Konzerthaus am Gendarmenmarkt, Sebastian Nordmann, made his orchestra available. A dream team was created.

Even the first listening of the recording made it clear: This is a hit. Max Richter had subtly worked on Vivaldi’s melodies, adding new minimal elements and creating an aesthetic that is a benchmark for future classical recording. The musicians did their part with great playing.

Richter had built the crossover bridge between classical and pop. This was ‘crossover’ in the best sense, combining classical and pop references, Steve Reich and Arvo Pärt with Brian Wilson, Antonio Vivaldi and finally Max Richter himself.

The album quickly charted in Germany. Internationally, it took a bit more time. We had some convincing to do at Universal Headquarters. Although the album had been in their hands for weeks, it took rave reviews in The Guardian, the Times and other newspapers as well as a sold out concert at London’s Barbican Center for the boss to finally ask, “Who is this Max Richter?” Richter’s work engaging an independent PR agency had done the trick. Attention was paid and word was spreading fast.

The album entered the charts in England and the USA. Many live performances followed, the German ECHO award came next and there will certainly be more successful stories coming.