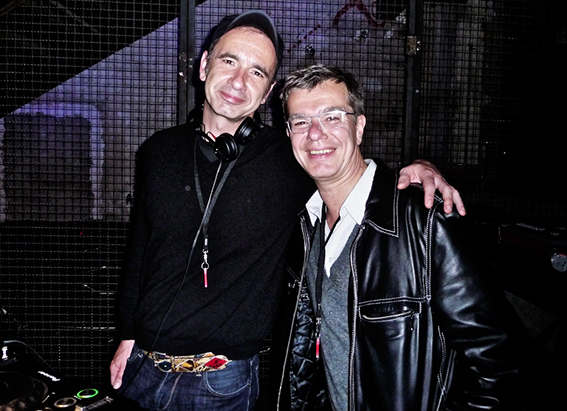 THE BEGINNING IN HAMBURG

When I started out as General Manager for Classical Music at Universal Music, one central question was: how do we reach a new, young audience? None of my friends or pop colleagues listened to classical music. This was not so much due to the music as to the image of classical music: it was dusty, conservative, stubborn. There was a lack of new entrances, doors had to be opened. In the concert halls, one did not feel comfortable: once wrongly applauded, one was the fool of the evening. On top of it you had to leave your beer at the entrance oft he venues….

We formed a small working group at Universal. Among them were: my boss Tim Renner, the managing director of Universal Special Marketing Joachim “Kirsche” Kirschstein, my longtime consultant Christoph Becker, the classical music product manager Martin Hossbach and the general manager of Deutsche Grammophon Ruud de Sera. All had grown up with pop and now wanted to know more about classical music. We lacked the freshness, the sexiness, the spontaneity, the modern staging in the classical world. Our aim was to listen to classical music with our friends – like we do with pop-music.  But the way to the concert hall was out of the question for them (yet). So we changed the approach: we don’t wait until people go to the opera, we go to them!

Ruud had already done some preliminary work and came up with the name “Yellow Lounge”.  Dirk Rudolph was commissioned to design a logo.  He came up with a little masterpiece: the traditional “Deutsche Grammophon” logo was „updated“ in a modern and fresh style. Before it was decided what and how the Yellow Lounge should be, Ruud had already produced a range of merchandising items: key rings, beer mats, matchboxes and things that only Ruud knew what they were good for.

Our aim now was to stage an evening of classical music in a club or bar. But which cool club makes its rooms available for a classical music event?  Which sound system is set up for classical music? Which classical music is actually suitable for clubs? Can we find a competent DJ? Techno, house or jazz DJs were a dime a dozen. But a DJ for classical music? Nobody around. We were disussing how, who, where,when etc  until Kirschstein managed facts: he had booked the bar „Die Welt ist schön“ in Hamburg-St.Pauli on February 1st, 2001.

It was packed: friends, colleagues, musicians and an astonishing number of pretty Hamburg girls came to the premiere. The DJs were Martin Hossbach, Matthias Rewig and Oliver Schwenzer. A good start.

A week later Ruud de Sera organized a very elaborate special Yellow Lounge at a Deutsche Grammophon conference in Vienna. This event had more the character of a Cirque de Soleil event: classical stars such as Magdalena Kožená sang Broadway melodies, a trapeze artist whirled through the air, people sat on designer furniture flown in specially from Munich and on the next corner stood Reinhard Goebel and his ensemble Musica Antiqua Köln.

We continued the Yellow Lounge-events in galleries, cafés and bars in Hamburg, Berlin and Leipzig. We invited first musical live acts: David Garrett, who at that time, after a break of a few years, was trying to redefine himself musically, or the Emerson String Quartet. At the Popkomm in Cologne we organized evenings with Matthew Herbert as DJ, Yundi Li and Siren Suite as live guests.

Things were progressing. But the big breakthrough was a long time coming. We were too careful: the music was never really loud, nor really quiet, the locations were good but not brilliant. We did not act consequently. Our first resident DJ Martin Hossbach threw in the towel. He believed that Universal Music as a corporation would not succeed in finding acceptance in the scene. He pulled out of the project and almost this was the end. But with the move of the whole Universal Music company from Hamburg to Berlin, we also changed our route for the Yellow Lounge.

THE YELLOW LOUNGE IN BERLIN

In 2002 Universal Music moved from Hamburg to Berlin. The perfect time for a move. Hamburg was lame since the mid 90s. Berlin started to happen. It was the perfect city to accomplish the idea of the Yellow Lounge – in no other German city we would have succeed.

The concept was turned upside down. We were looking for a permanent club and found the “Cookies”, Berlin’s best club address. Cookie – the boss of the house – was ready to take the risk of classical music. He risked his good reputation, because Klassik was (still) uncool. Cookies offered ideal conditions: a perfect sound system and very good acoustics for the live sets. Smiley, the nicest doorman in Berlin, welcomed the guests. Behind the counter staff was a huge poster with the word: FUCK.

From now on there were two short live sets every evening. Acoustically. Embedded by DJ sets. Visually the music was accompanied by video projections. For this we won the VJs Pfadfinderei, Safy Sniper and Philip Geist, among others.

The first Monday of the month became the Yellow Lounge evening. The announcements were sent to the Cookies e-mail distribution list at short notice. We refrained from further PR measures.

The premiere was on May 7, 2003. Live guest was Yundi Li , the current classical music superstar from China. In 2001 he already played at the Popkomm-Yellow Lounge in Cologne. In front of an invited audience. Now he gave his debut on the dance floor at Cookies. Surrounded by over 400 people. All young, curious, casual. The girls in the little black dress – health shoes and blouse stayed in the cupboard. Yundi Li played for his peers.  The dream audience of every concert hall manager. He took the audience by storm.

The start was successful – the foundation for the future was laid. Within a short time we established the Yellow Lounge and made it a hotspot in the club landscape. For a long time we stayed at Cookies. Later we moved to the WMF, Berghain, Gretchen, Weekend, Maria; the Neue Nationalgalerie,  Felix and the Badeschiff. Something had changed: suddenly we were welcome everywhere with classical music!

The scene success of the Yellow Lounge also radiated into the house of Universal Music: the classical music image „inhouse“ was still very sedate at the beginning. No wonder, because since the 70’s the recording companies have been run by rock and pop legends. They are all about hits, glam, pop, trends, sex and volume. Classical music also has hits, glam, sex and volume – but only at second glance. Hardly any top executives listen to classical music. As long as the turnover is right, they are happy to let it go. From time to time one likes to show off the icons of classic music. This is good for politics and for dad and mum (I was allowed to experience that too). The success of the Yellow Lounge led to an increase in the number of pop colleagues asking for Yellow Lounge tickets, classical music CDs or concert tickets. We were suddenly taken seriously. We were the topic.

This experiment has been working for over 10 years. In the meantime, many classical music connoisseurs have also smuggled themselves into the mail distribution list. The experience is extraordinary: seldom is the audience so close to the artist, seldom is the artist looked so intensely on the fingers or in the eyes at close range. The atmosphere is loose and relaxed. During the live set, the audience is crackling with excitement, the audience is electrified.

Meanwhile the Yellow Lounge is also held outside of Berlin. First in Frankfurt at the Cocoon-Club. And now in Seoul, London, New York, Stockholm, Salzburg or Copenhagen. It took a while before Universal colleagues in other countries took up the idea. The top management in London at the time felt the need to stop talking about the “Yellow Room” all the time. But now the Yellow Lounge is the top priority of the Business Development department. With “Bang & Olufson” an international sponsor could be won. With this, there is finally the possibility to pay the musicians for their performance. Because up to now nobody has earned money at the Yellow Lounge. The musicians played for free, the DJs and VJs got a manageable fee, the clubs just got their expenses (there is no dancing, so the thirst is limited). Expensive are the rents for the Steinway grand piano and the beamers. With an entrance fee of € 6.00 there are a few bills for Universal.

Where do we go from here? There are first events where jazz and pop artists perform. That was a taboo for a long time. And while at the beginning of the Yellow Lounge the content of the evening was decisive, the format is now being used to promote new albums by the Universal artists. This is understandable, because Universal is paying the bill. Perhaps the Yellow Lounge will soon be bookable as a package for company parties, weddings and other events via franchisees?

From now on the Yellow Lounge will continue without David Canisius for the time being. He leaves the desk. For 10 years he led through the evenings with elegance, humor and nonchalance. He accepted listener requests with joy. It was always a personal concern of his to bring the music that resounds in his heart to a new audience. We will miss you, Canisius!

A FEW HIGHLIGHTS OF THE LAST YEARS:

The most booked VJs were Scouting, Safy Sniper and Philipp Geist.

And of course Canisius. 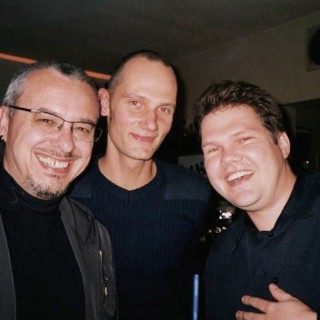 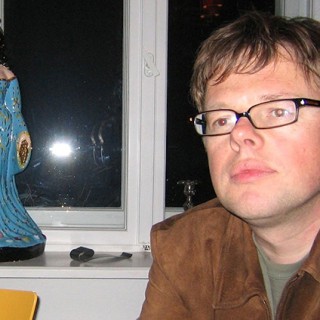 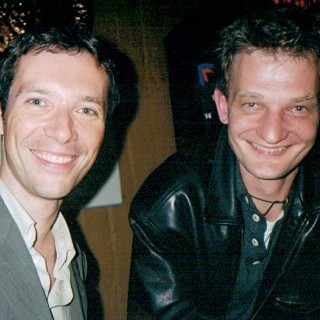 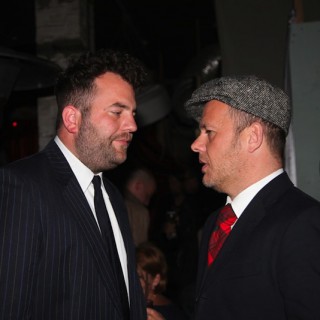 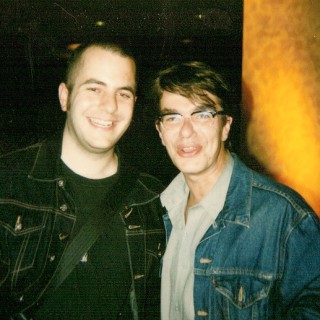 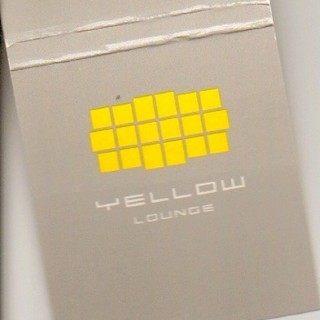 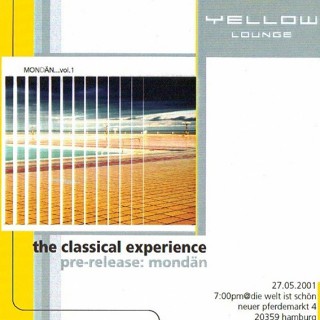 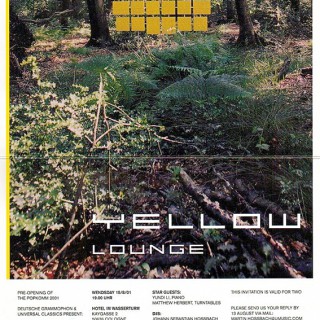 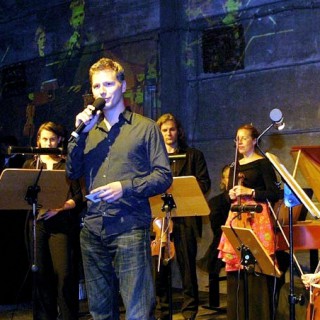 Per Hauber announce Danielle de Niese at the Yellow Lounge-event in the Tape-Club. 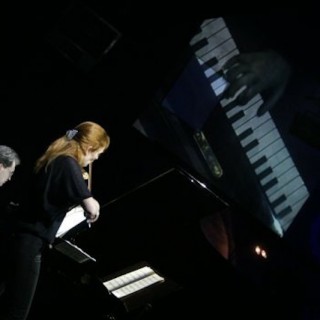 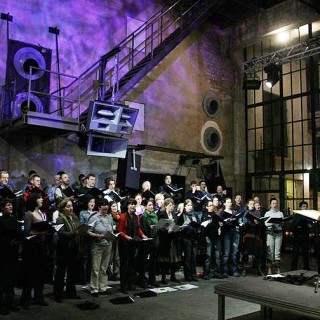 The Berliner Rundfunkchor at the YL in Berghain. 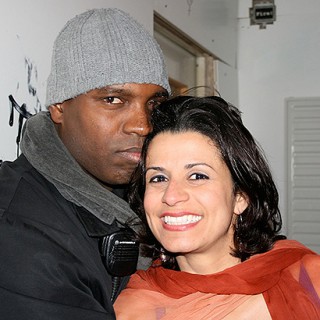 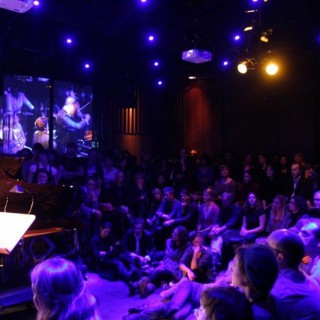 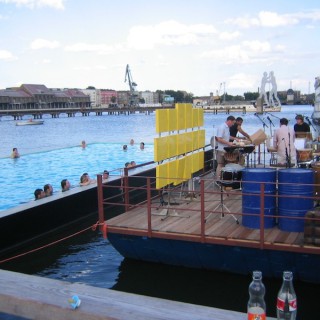 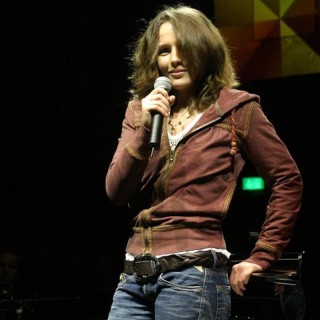 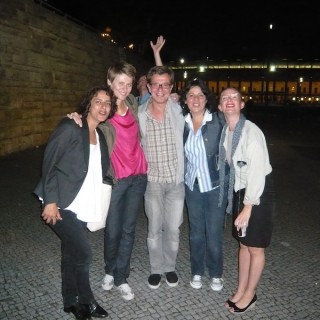 After another successful night… 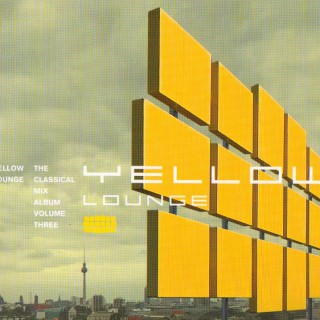 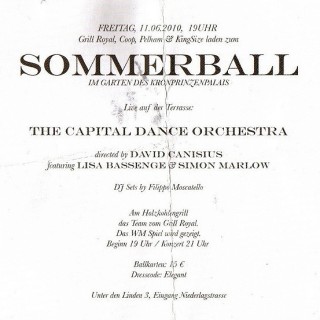 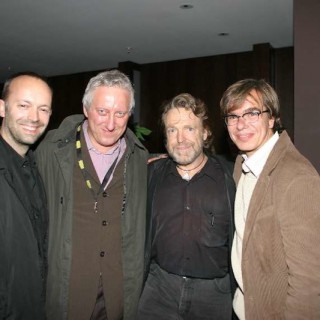