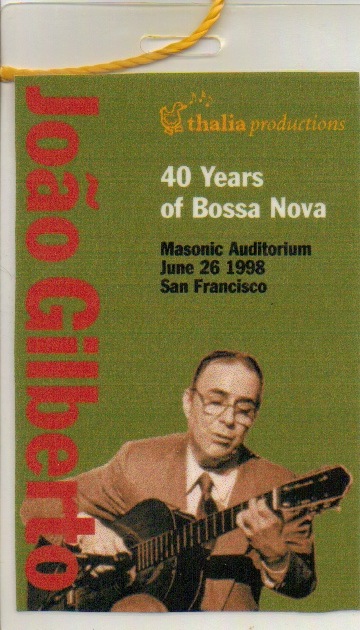 João Gilberto is world famous as the inventor and most important interpreter of Bossa Nova. Equally famous is his eccentricity and obstinacy – so many stories, myths, rumours and legends accompany his long life. In Brazil he is hardly ever seen. Only rarely does he leave his apartment. Few confidants have direct access to him and he rarely gives concerts or releases new albums. That’s why it was big news when Polygram released the album “João” in 1991. There was much about it that was good, even if Clare Fisher‘s arrangements are a bit too dominant.

Four years later I called João for the first time. In conversation he said he thought the time had come for a new album. We exchanged faxes. Together with my French colleague Jean-Philippe Allard, who already had a reputation for dealing with difficult artists, we sent João an offer. The proposal went unanswered. Time passed.

In 1998 I finally had the opportunity to hear João live. At that time I worked for Motor Music (Polygram) and I posted the experience with João for our homepage. I found my musical travelogue again recently:

In 1998 my wife Cristina got an offer to accompany João as tour manager. Seven solo concerts in five weeks – three in the USA, four in Italy. Wages and locations sounded right… And there are worse things than going on tour with the inventor of the Bossa Nova, aren‘t there?

The tour started in New York‘s Carnegie Hall. It must have been a great concert. João was in a good state of mind. But just one day after the show his mood changed. The traveling party consisted of Cristina and João, his doctor, his manager and his daughter Bebel. But even before the second concert, in San Francisco, Bebel and the doctor bailed. And that‘s when things started getting really complicated: He didn’t like the hotel, the service was not up to his standards, the mattress wasn‘t right, always the mattress…  That‘s when his manager left or, truth be told, was taken away. He ended up in the hospital with signs of a heart attack. He was out for the rest of the tour.

The tour group was now reduced to Cristina, João’s son (from his marriage with Astrud Gilberto) and João himself. And it got more difficult still. Hotel check-out dates were rarely kept because João refused to leave his room. This led to all sorts of complications since the rooms had already been booked for the next guests. The hotel managers weren‘t pleased.

Shortly before the third gig, in Miami, Cristina was also ready to leave the tour. Day after day, in tears on the phone, she cried she couldn’t stand the tension. I tried to cheer her up, for both altruistic and selfish reasons. I wanted to help her and I wanted to see the concert in Turin. My friend Ulli Maier from Düsseldorf and I had booked a flight weeks before. We would have crawled there on our knees for this opportunity.

João (and probably I) finally convinced Cristina to stay on and come to Italy. In the meantime, João’s girlfriend had also arrived, which caused further turbulence.cThe first Italian concert was in Turin in the market square. It was a wonderful summer evening, warm and glowingly bright. Bella Italia.

João came on stage on time, and the concert was pure magic. He played for an hour and a half songs known and less known. It seemed like only ten minutes to me. I was in a trance. I had never experienced anything like it before. Every quarter of an hour the church bells rang, and João incorporated their sound into his songs. After the set, he offered one encore. Then he left the stage, in a hurry as always, directly into the waiting limousine and straight into the hotel.

My friend Ulli and I strolled Turin in a daze, so transported were we after the concert. After midnight I reached the hotel and looked forward to seeing Cristina again. It had been almost three weeks since we’d been together. She and João’s girlfriend met me right at the entrance. They were on their way to the hotel kitchen to have a steak prepared for João – “Well done, not dry!“  When João’s girlfriend saw me, she insisted that I had to meet him right away. After all I‘d heard I wasn‘t so sure it was a good idea, but she dragged me up to his room. He greeted me warmly, saying he‘d seen me from the stage. We didn’t know each other but somehow he knew. Then he abruptly left the room and retreated next door into his bedroom. With a look of dread his girlfriend followed. I heard a violent exchange of words and took the precaution of not speaking up. Fifteen minutes later she came into our room very upset, João’s guitar in her hand.

The next morning the group was scheduled to leave the hotel at 10:00. Once again, João refused to leave his room. That gave me one more day with Cristina.

The new departure time was scheduled for the next day at 14:00. My taxi was ordered for 14:30. Cristina and I said goodbye after breakfast so that she could take care of her artist’s departure. I went out for a walk. When I returned everything was in turmoil yet again. The departure time had come and gone. New departure: the following day. Then came another round of discussions with the hotel management, the travel agency, the promoters… I took my suitcase and was about to get into a taxi when the porter called me back again. There was a call for me at the reception. It was João. “Christian, it was so nice to meet you. Please join us for my concert in Rome.” A tempting offer, but duty called. I had to go back to Hamburg and a slew of appointments and commitments.

When I phoned Cristina the next day, she told me that João wouldn‘t let it go. I had to be at the Rome concert. Of course I couldn’t refuse so I flew directly from Hamburg to Rome, arriving just in time for the open-air concert. Again I fell into a trance – something I only experienced at a João concert. Surprisingly, Robert Palmer sat next to me with his family. He chain-smoked cigarettes, one after the other, although João asked several times from the stage for the audience to stop smoking. It would harm his voice.

A meeting was to take place in João’s suite after the concert. Palmer was already waiting with his two children in our own hotel room. João’s son had invited him. He was a sound engineer and was in charge of most of the concerts and had met Palmer by chance a few days before in a restaurant in Milan. Palmer was such a big fan of João’s that he flew into Rome with his whole family. I always had good feelings for Palmer. He had released some great albums with tasteful  album artwork and, by now, world-famous videos. But that night my positive impression soured. He only talked about himself, didn’t allow any dialogue, lambasted Polygram, chain-smoked mercilessly (he died of a heart attack at the age of 54) and emptied one whisky glass after another. At my expense, by the way.

After a two-hour monologue we – Palmer, his children, Cristina and I – were asked to join João in his suite. João was clearly also irritated by Palmer, who continued his monologue without a moment’s hesitation and kept repeating how great he thought João Gilberto was. Then Palmer mentioned that he had written a song today – and started singing it. João didn’t even know Palmer and was very irritated at his presumption. Fortunately, it was 3 in the morning and the children were very tired. The Palmers finally left.

Until then João had only spoken Portuguese. Now he felt more relaxed and switched to English. I talked to him about songs he had switched in his program from Turin to Rome, like “Malaga.” He picked up his guitar and played the song for me. A dream come true: João sitting on the sofa in front of me with his guitar and a glass of wine, as we talked about his old albums, about the arranger and composer Claus Ogermann, about this and that… Again and again he played songs in between stories. Very relaxed, very informal, very cordial.

Then the day dawned. I had to go back to Hamburg. The dream was over. Yet that very evening Cristina called again, tears streaming – more organizational problems, more emotional, more disagreements.

So much for my original report from 1998. João ended his tour with a surprise show in Perugia at the Umbria Jazz Festival. He performed in duo with Caetano Veloso. How did this come about? Quite simply, the festival director knew of João’s passion – of all things, his love of a very good mattress. João hadn’t forgotten that there was always a good bed in Perugia. So he accepted the invitation from the festival, Caetano jumped at the chance and they performed a few songs together. According to Cristina it was another musical highlight on the tour.

When I think of João today, I also think of the German author and journalist Marc Fischer. He was born in the same part of Hamburg as me. We knew each other briefly. Once in a while he called me, frantically asking for “urgent” recall on a memory for a story he was researching. In 2010 he called asking for an introduction to João. He was planning to write a book about him. But Cristina and I couldn’t help due many other obligations.

Marc set out alone to find João. He went to Brazil and met many companions who knew João. No one could connect him. But that still didn’t  stop him from writing the wonderful book “Hobalala – In Search of João Gilberto.”

One month before the publication Marc called us again. He needed permission to print lyrics – and he was planning a release party in Berlin. This time we were able to support him and provided the necessary contacts. But then tragedy struck. He’d neither attend the party nor witness the publication. Marc Fischer had taken his own life.

A few weeks after the tragic event, Cristina wrote about the book in her regular O Globo column (chief columnist: Caetano Veloso). As a result, a major Brazilian publishing house licensed the rights and published a Brazilian translation.

Recently we learned that João himself had read the book and appreciated what Marc had written. He regretted not having met him. João claimed it was his girlfriend who had intercepted Marc’s letters. He said he never saw them.

So now “Hobalala” has a place of honour on João’s bookshelf, next to Yogananda’s “Autobiography of a Yogi.”